I saw four films (again, my usual pace) at SXSW on Thursday, March 19 – Day 6 for me  – and enjoyed something in each of them, though one documentary (out of three plus one narrative) stood out from the crowd, and that was Twinsters. It tells the story of how Samantha Futerman – born in South Korea and adopted by a family in New Jersey – found her identical twin sister – adopted by a family in France – and reunited with her. Here is the start of her post-screening Q&A:

It is a very moving story. 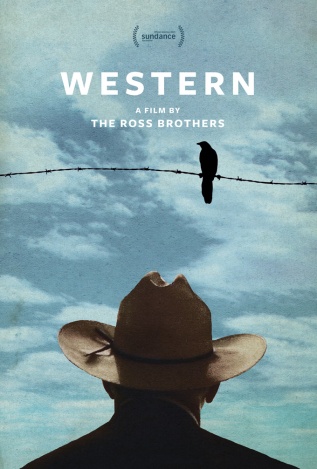 Winner of the U.S. Documentary Special Jury Award for Vérité Filmmaking at the 2015 Sundance Film Festival, Western is a true observational documentary, which means that there are no interviews, no voiceover, and only rarely any non-diegetic music on the soundtrack. As such, it is a refreshing departure from the (present-day) usual documentary conventions of talking heads and soaring scores. Set in Eagle Pass, TX, a border town across the Rio Grande from Piedras Negras, Mexico, the movie focuses on two characters: Mayor Chad Foster and cattleman Martín Wall. Each struggles to deal with the growing drug cartel violence over the border, as the U.S. State Department shuts down crossings and the importation of beef. Filled with elegiac shots of the river, the dessert and the sky – squarely in the tradition of classic Hollywood Westerns – the film is often mesmerizing and beautiful. Unfortunately, it’s also, ultimately, frustrating, since the filmmakers never do more than approach the cartel issues obliquely: all of the drama takes place off-screen, and what we are left with is the reactions of our main subjects. It’s all talk and no action, which over 90 minutes can be hard to watch. Still, there is something hypnotic about the film’s rhythm, and I cannot quite dismiss its images from my head.

As I wrote, above, Twinsters is the story of identical twins, separated at birth, who find each other as adults. Samantha Futerman was a happy-go-lucky actress in Los Angeles, building a career in supporting roles in movies like 21 & Over, when, after starring in a Kevjumba YouTube video, she received a message from a man she didn’t know with a link to the Facebook page of a woman who looked just like her, named Anaïs Bordier. Both young women had been born in South Korea and given up for adoption, and for some reason not kept together. In fact, the adoption agencies that took care of each of them didn’t even know of the existence of the other sister. Futerman was raised in New Jersey, while Bordier was raised in France (and is now a fashion designer). Twinsters tells the improbable, amazing and incredibly poignant tale of how Samantha and Anaïs are reunited. Well shot and well edited, with genuinely moving moments, and with two truly engaging women at the center, the film is a must-see. 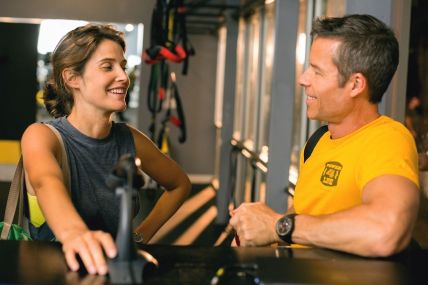 Computer Chess director Andrew Bujalski returns with another quirky, off-beat film, this time with actors of greater renown. Starring Guy Pearce (Memento), Cobie Smulders (“How I Met Your Mother“) and Kevin Corrigan (Pineapple Express), Results, in spite of its unfortunately generic title, is a funny low-key comedy about depressed souls looking for love (even if they don’t know it). Pearce plays the owner of a gym, looking to expand his business, and Smulders is his top trainer. Corrigan is a newly rich divorced man who hires Smulders to get in shape. Together, they form one of the most strangest love triangles I’ve seen in a while. With gently comic moments and sweet chemistry between Smulders and Pearce (whom you buy as a fitness guru, since he’s probably one of the fittest actors around), the movie provides a pleasant viewing experience for its 105 minutes. That’s both its blessing and its curse, though, since it’s never quite more than just pleasant. Still, there’s a lot to be said for keeping one’s filmmaking ambitions simple and delivering the goods, however small they may be. See it for the actors, who are a joy to watch.

I know and care nothing about sneakers, but I enjoy films about obsessive people, and that’s exactly what Sneakerheadz is. Presenting the history of the sneaker and its designers and collectors in a concise and clear manner, this well-shot and well-edited movie should please aficionados and laymen, alike. While the film does a decent job dealing with the dark side of this addictive obsession, however, it could do more to show how the fetishizing of the sneaker affects those in lower-income brackets, since all of the interviewees are either rappers, sports stars, designers, DJs or resellers. Overall, however, it is a fine document about a very strange (to me) phenomenon.