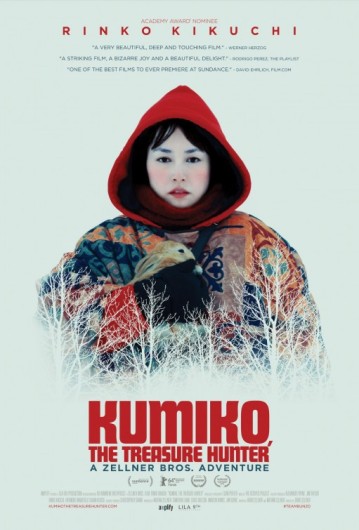 This past weekend, I presented the new film from the Zellner Brothers, Kumiko the Treasure Hunter, at Baltimore’s Cinema Sundays series. I had previously seen it last year at the 2014 Maryland Film Festival (it premiered at the Sundance Film Festival in January, 2014, and then also played at SXSW). The film has received mostly positive reviews, though I had very mixed feelings about the movie after my initial viewing. Still, I found it visually quite compelling – and liked it a little more after viewing #2 – and think it is a must-see for fans of the Coen Brothers’ 1996 Fargo. It opens today at the Charles Theatre.

For those of you who are fans of Fargo, or of the FX series inspired by it – or both – Kumiko offers an interesting riff on the original story. Based on an urban legend that arose after a Japanese woman was found dead in a frozen field in Minnesota in 2001, the movie tells the tale of young Kumiko, living in Tokyo with her pet rabbit, who becomes convinced that the buried treasure featured in the Coen Brothers’ film actually exists. So she abandons everything and heads to Minnesota in search of that thing dreams are made of, that may only be the stuff of dreams. The movie is rich in atmosphere and features a wonderfully offbeat performance from Rinko Kikuchi (Babel, Pacific Rim) as Kumiko.

Unfortunately, the film also features a severely depressed central character, and watching her spiral downwards eventually becomes a chore. I loved the initial set-up of her dead-end existence at home. We get just enough sense of former promise – a happy childhood friend she meets, hints of former loves, references to a soured attitude – to make Kumiko’s present existential despair especially poignant. As Kumiko gives into madness and travels to America to track down the fictional treasure, the movie struggles with tone. Is it funny? Is it sad? Is it horrible? The answer is a combination of all three, and while there is nothing wrong with juggling cinematic texture like this, when the ultimate outcome is as melancholy and lonely as it is here, then the laughs, at the end, feel hollow.

Still, there is much to admire in the effort, and I found this film a major step up in production value and performance from the previous film I had seen from the Zellners, Goliath (which also deals with loneliness and despair). One sequence, in particular, still haunts me, and that is when Kumiko – about to depart on her quixotic quest – tries to set her beloved bunny, Bunzo, free. It’s too bad that her relationship with Bunzo is the most meaningful one in the movie, however. Once he’s out of the picture, a little part of me was, too.