Sadly, on Saturday, the fourth day of the 2015 Maryland Film Festival, I started coming down with some kind of virus of some sort, and proceeded to feel sicker and more fatigued as the weekend wore on, eventually opting to stay home and do my set to recover. As I write this I am less feverish, but still extremely tired, which explains why it has taken me so long to post this final wrap-up of the festival (which isn’t much of a wrap-up, given my dwindling energy in the last two days). But we stuck to the plan, and Stevenson University Film/Video students did get to meet the two filmmakers they were scheduled to meet, Kris Swanberg (on Saturday) and Khalik Allah (on Sunday), pictured below:

I’m glad that part worked out . . . in any case, on Saturday, I forced myself to stick to some kind of a screening program before completely giving up on Sunday after just one movie. Here is what I saw.

“The first few minutes of the wryly hilarious People, Places, Things find professor and graphic novelist Will Henry (Jemaine Clement, What We Do in the Shadows) thrust unwillingly into a new way of life. After his wife abruptly leaves him for another man, he finds himself having to navigate single fatherhood with his twin girls while juggling his career. As time passes, he adjusts to his new routine, but his reluctance to let go of the past cripples his ability to make real progress and meet someone new.

Noticing that her professor is in a bit of a funk, Kat (Jessica Williams), a student of Will’s, suggests that he come to dinner at her house to meet her single mother Diane (the wonderful Regina Hall). This sets up an awkward first date which may lead to promising new love—or just serve to further complicate already complicated situations.” (by J. Scott Braid)

This was not a great film, but it was an entertaining one. I’ve seen Jemaine Clement in various supporting roles over the years, but never really latched on to him as a performer (I saw not one episode of his “Flight of the Conchords“), but he makes for a very appealing sad sack of a leading man. Regina Hall (The Best Man Holiday) is lovely, although we, criminally, do not see a lot of her, nor of Jessica Williams (“The Daily Show with Jon Stewart“). The movie is much more about Will working out his issues with his wife. Which is fine, except that that secondary plot of his blossoming romance with Diane is given very short shrift (and little screen time), which means that the final resolution feels a bit unearned. But the dialogue is often snappy, and there are far worse ways in which one could spend 85 minutes.

“Samantha and Jasmine discover their unplanned pregnancies about the same time. Samantha (a wonderful Cobie Smulders) is an engaged and successful teacher in a public school in a lower income neighborhood in Chicago that is set to close, and she immediately starts to worry about compromising her future career plans. Jasmine (terrific newcomer Gail Bean) is one of Samantha’s prize students, and worries about her plans for college being disrupted by her pregnancy.

These concerns ripple through friends and families in unpredictable but totally believable ways. Samantha’s boyfriend is thrilled, supportive, and proposes marriage, but doesn’t really understand Samantha’s quandary. The pregnancies also challenge Samantha and Jasmine’s close relationship, largely because Samantha, as both mentor and friend, makes presumptions about Jasmine and her goals.” (by Jed Dietz)

I am not a particular fan of the work of Kris Swanberg’s husband Joe, so I am happy to report how much I enjoyed Kris’s feature. She is a very fine filmmaker, with a great ability to direct actors, and she knows what she is doing with the camera. Cobie Smulders (“How I Met Your Mother“) is quite fine as Samantha, and Gail Bean is a remarkable find. Despite a gently surprising plot twist in the final third – which returns agency to the younger character – the movie cannot entirely escape what feels like a white, liberal-guilt origin, yet this never takes away from the overall humanistic quality of the script.

“The title comes from a famous analysis of slave hierarchy and assimilation by Malcolm X, and photographer/filmmaker Khalik Allah is determined to pay tribute to people who are easily dehumanized in contemporary culture. Hanging around the infamous corner of 125th and Lexington in Harlem on a series of summer nights, Allah engages a wide variety of people who regularly inhabit the area and some who are just passing through. Concentrating on one corner in a tough city neighborhood reminds one of David Simon and Ed Burns’ reporting that resulted in the book The Corner, and the acclaimed HBO series that was adapted from it, and once again a powerful work of art emerges from an urban corner.” (by Jed Dietz)

Wow! This is quite an ambitiously experimental work. Shot almost entirely on the corner of Lexington and 125th Street in Manhattan, at night, the film is comprised of moving images of the denizens of the area (and the occasional passerby) and the police, while audio recorded separately – and not in sync with any image – plays as a vocal symphony below the visuals. It was a tough film for a sick man, late on a Saturday, to see, but it was quite a moving experience, in many ways. I’m still not sure that the film needed to be 60 minutes long, but that could be my illness talking. As it is, after seeing the film, I left that universe – where hope and despair coexist, where addiction and beauty go hand in hand – transformed by what I had seen, even if I’m still not sure that I understood the half of it. 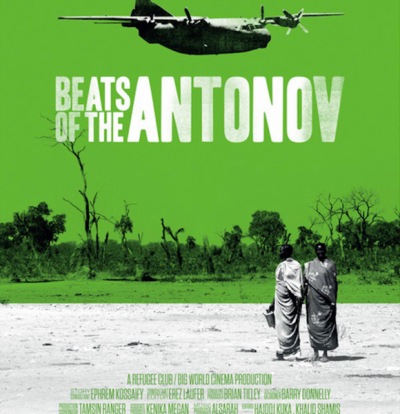 “Winner of the People’s Choice Documentary Award at the 2014 Toronto International Film Festival, director Hajooj Kuka’s Beats of the Antonov is a harrowing and heartening look at the people of the besieged Blue Nile and Nuba Mountain regions of Sudan, a people who have learned to not just cope but persevere under the most extreme circumstances. This stunning documentary finds the Sudanese filmmaker, a seasoned war correspondent, embedded within these communities as they are regularly bombarded by Russian-made planes (hence the film’s title) and forced from their homes and villages. Arrestingly lensed, the film introduces us to incredible musicians, activists, soldiers, farmers and intellectuals, whose fascinating stories highlight the important role their culture, and particularly music, plays in their daily lives.

Although the civil war here is a fight between North and South, Arab and African, and Kuka likely has his own opinions about the situation, it’s telling that all sides are represented and that the filmmaker does little to editorialize. For Kuka, what’s important is to show that culture, tradition, and particularly music, can sustain people, even in a war zone. People who manage to retain their culture, their music, their ways of life, can maintain their humanity and their dignity, even in the most perilous conditions.” (by J. Scott Braid)

Other than the fact that I was confused and thought I was going to see Frame by Frame instead (I kept on wondering, at first, why we were in Sudan, and not Afghanistan), I found this movie extraordinary. The filmmaker is right in the middle of the conflict, risking life and limb to film the devastation visited on these rebel communities by the government in Khartoum, so we see explosions, bloody corpses (animal and human), and much more. We also see and hear the people of the region as they explain why they resist the pressures from the north to de-Africanize them. This is a moving, harrowing and extremely inspiring film.

Thanks, Maryland Film Festival! I hope that, next year, I can avoid getting sick and enjoy more screenings . . .