[NOTE: I reviewed this on the radio on June 5, along with “Spy” and “San Andreas.” The reviews start at 38min. on the podcast of the show.] 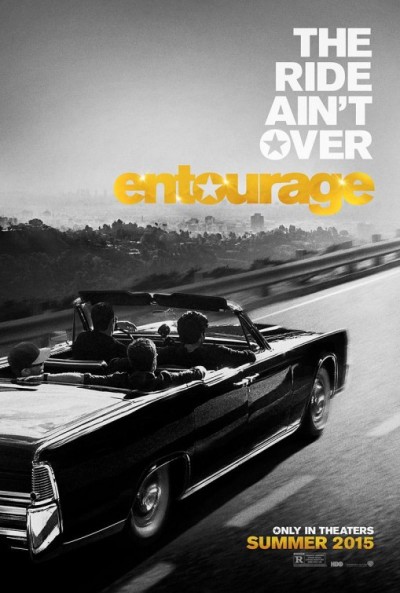 In Entourage, the boys are back in town (apologies to Thin Lizzy), and, as before, it’s bros before hoes all the way. Which should come as no surprise to anyone who watched even one episode of HBO’s long-running series (2004-2011) of the same name. I watched far more than that, making it all the way through five seasons before I gave up on the gleefully drunken, stoned and unapologetically misogynistic romp through the (not so) fictionalized life of a male movie star and his friends (the “entourage”). It was a guilty pleasure for me until it became a guilty bore. Executive-produced by Mark Wahlberg (Broken City), the series was originally intended to be an entertaining and (only mildly) exaggerated look at someone very much like Wahlberg, himself, to whom celebrity had come after a not-so-privileged upbringing. Over eight seasons, we watched the rise and fall and rise again of actor Vincent Chase (Adrian Grenier, The Devil Wears Prada); his best friend and manager, Eric, or “E” (Kevin Connolly, The Notebook); his half-brother, Johnny “Drama” Chase (Kevin Dillon, Poseidon); his driver (and everyone’s sidekick), “Turtle” (Jerry Ferrara, Think Like a Man Too); and mercurial super-agent Ari Gold (Jeremy Piven, in a career-making role). It was a blast, until it wasn’t.

Now, in a 104-minute feature film, we meet Vince and his friends again. For those who may know little or nothing about the original series, fear not, for we are offered, early on, a recap of the lives of the characters, courtesy of a Piers Morgan profile (it’s an alternate universe, then, since his show is long off the air). Before that, however, we meet the bunch in Ibiza, where Vince is partying on a yacht (cue female nudity) in celebration of the end of his 9-day marriage to … I don’t know, actually, since I never got to Season 8. No matter: the women have always been incidental to these guys. Except for (maybe) Mrs. Gold (much stronger than Eric’s on-again-off-again girlfriend Sloan), who wields enough influence over her husband that she was able to force him to quit agenting (a word I just made up). Except that Ari minus work is not that exciting, so as the film begins she has grudgingly allowed him to go to back to Hollywood, albeit as a studio head (which she and he mistakenly believe will be a calmer job than the one he had before). In that role, Ari approaches Vince to star in a new movie entitled Hyde (as in Jekyll and …), which Vince agrees to do, as long as he gets to direct.

Flash forward a year (more or less), and Piers Morgan brings us up to date not only on what’s happened in Seasons 1-8, but also on what has happened with Hyde. Turns out it’s over budget, and Vince needs more money. Count this financial need (or Hyde, itself) as the MacGuffin, since what this movie (and all of the previous episodes) is about is male bonding and friendship. That’s not to say that there isn’t a script, and that the movie isn’t well structured (writer-director, and series showrunner, Ellin knows his craft). It is. Imagine the film as either an extended episode or a truncated season, and you’ll get an idea of the vibe and the pace. We’re here to enjoy the actors we’ve come to love (or not), see them flirt with (and maybe have sex with) beautiful (naked) women, drink too much, smoke some weed, and behave stupidly until the moment of truth, when suddenly they will all get their act together and pull through whatever crisis has developed. It can be crass, but also fun. Take your pick (the two are not mutually exclusive, however). Everyone’s here to have a good time. That doesn’t mean you will, but I did, for the most part. I was especially excited that “Gaysian Lloyd” (Rex Lee) was not left out, and was even given a significant (and very funny) subplot of his own. Over the course of the seasons I watched, his eternal optimism and resilience in the face of Ari’s meanness was one of the most engaging parts of the show.

So – know what you’re getting yourself in for, and either go with it, or ask yourself what you’re doing in the theater in the first place. If you loathed the series, and aren’t Wendy Molyneux, stay home. But if you were a fan, then this is a great way to say goodbye to the boys (until Entourage 2, anyway). Enjoy!