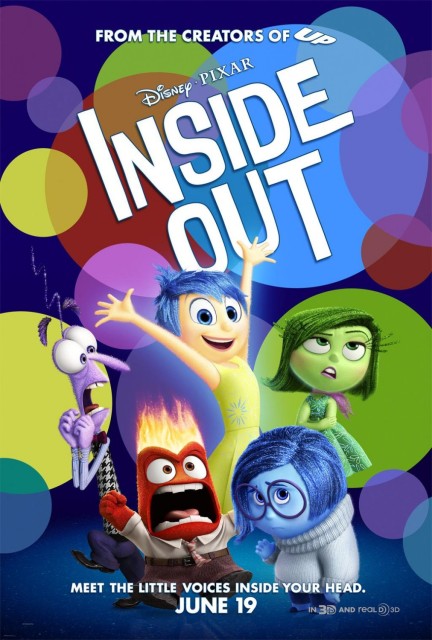 Inside Out (Pete Docter/Ronaldo Del Carmen, 2015)

Inside Out may not quite rival the first 10 minutes of Up (co-director Pete Docter’s last film) – then again, for my money, nothing that Pixar has ever done, as good as their movies usually are, comes close to the sublime perfection of the opening of that movie – but it comes awfully close. Here, though, the aesthetic trajectory is reversed. Whereas in Up we begin by being overwhelmed with truths about the human condition, then descend into a comparative banality that improves as the film goes on, ending in a close approximation of the beauty of the prologue, in Inside Out we start with silly fun that threatens to go nowhere interesting, and then slowly move towards profound meditations on the meaning of life. It’s a very satisfying journey and by far the most complex and multi-layered piece of commercial entertainment available at the multiplex right now. When Me and Earl and the Dying Girl opens in Baltimore next week (at the Senator Theatre), Inside Out will then have a rival for a film that best blends comedy and pathos (avoiding bathos, thankfully). For now, if you want to laugh and cry in equal measure – and be able to bring the kids! – then go see Inside Out immediately.

Inside Out begins with twin births, of Riley and Joy. Riley is a human baby girl, and Joy is a yellow-dressed blue-haired female humanoid (voiced by Amy Poehler, of “Parks and Recreation“), who appears inside of the newly-formed control room at the center of Riley’s brain at the very moment 0f her host’s birth. Joy is so-named because her role is to ensure Riley’s constant happiness. Suddenly, as she manipulates the various buttons and levers on her control panel, another pair of hands appear – as blue as Joy’s hair – and trigger a massive Riley crying fit. These hands belong to Sadness (voiced by Phyllis Smith, of “The Office“), and for the next 11 years, they will do (mostly) gentle battle over Riley’s moods. They are not alone, though, for they are soon joined by Fear (Bill Hader, The Skeleton Twins), Anger (Lewis Black, “The Daily Show with Jon Stewart“) and Disgust (Mindy Kaling, also of “The Office“). Why only five emotions? Well, it turns out that Docter consulted with a noted psychologist, and that these – plus surprise (which Docter and his team deemed too similar to fear) – really are the six main emotions of the brain (at least according to current psychological research). So there you go.

Until Riley turns 11, all is more or less good. Her three-person family (no siblings) lives happily in Minnesota, where she is a hockey star (how nice to see a mainstream film promoting such an active and athletic young woman) and spends her leisure moments with her best friend. But then they pack up and head to San Francisco, where her father is involved in what appears to be some sort of start-up venture (this is Riley’s story, so we never really learn the details). This violent rupture from the up-until-then idyllic days of youth requires extra effort from Joy (the de facto leader of the brain) to keep Riley’s emotional ship balanced, especially as mishap piles upon mishap: the city townhouse into which they move is drab compared to the Minnesota digs they just left; the family’s moving van has taken a detour to parts unknown; and the first day at Riley’s new school is a disaster. Joy’s task is made all the harder because Sadness, inexplicably (to herself, as well), keeps touching the globes that store Riley’s core memories (heretofore all yellow with joy), tainting (and tinting) them with her blue melancholy. In a tussle over these globes, Joy and Sadness are accidentally sucked out of the control room and thrown into the nether regions of Riley’s brain, leaving Fear, Anger and Disgust in charge (whoops). In the outside world, this means that Riley is no longer herself, a perfect metaphor for the hormonal changes that come over all of us as puberty approaches. In the inside world, this means that the movie turns into a quest story, as Joy and Sadness must find their way back to the control room as they travel through the now unsettled and collapsing territory of Riley’s brain. Will they make it back before Riley does something drastic? Watch and see . . .

So far, so good, and modestly entertaining, though hardly profound. As the film progresses, however, following Joy and Sadness on their odyssey, what emerges is a complex narrative about the nature of happiness and the role that sadness plays in our ability to feel the full range of our emotions. There is a direct link between joy and sorrow: in every happy memory there is embedded a nostalgia for time past, which tinges it (the memory) with melancholy (in the color scheme of Inside Out, it colors it blue) and this is what makes us human. The two emotions can co-exist within the same sphere, and to deny the one in favor of the other is to deny our basic humanity. As this realization dawns on Joy (perhaps explaining why her hair has always been blue, though her clothes are more yellow-green), so does it give new energy to the story, and raise Inside Out far above the usual summer fare.

There is plenty of goofy fun along the way, and plenty of delightful vocal cameos, too (for you to recognize). For film aficionados, especially, the dream center of the brain made up as a Hollywood studio (Hollywood as dream factory) is very clever, and that is only one of many similarly smart set pieces (just wait until you go briefly inside other people’s brains). As is typical with Pixar (and its parent company, Disney), as much of the humor is accessible to adults as it is for children (though the stuff meant for the former will be far over the heads of the latter), making this a film for all. If you don’t mind a good cry to go along with your laughs – the film should prompt the same joy tinged with melancholy in you as it does in the main characters – then you you’ll love Inside Out and emerge reminded of the very reasons why being alive and human is such a special and wondrous thing.