[NOTE: Missed the show? You can always listen to the podcast!] 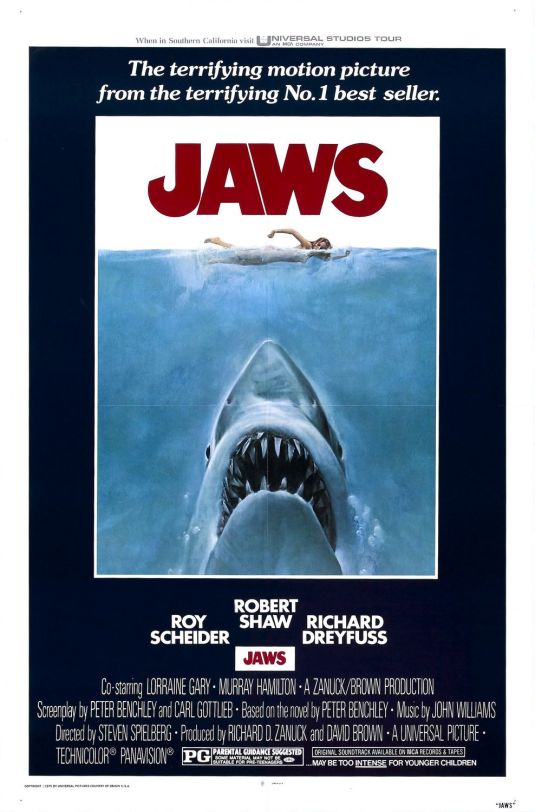 On Friday, June 20, 1975, a then little-known director by the name of Steven Spielberg premiered his second theatrical feature, Jaws. Based on author Peter Benchley’s smash debut novel – a best-seller already a year before its adaptation came out – the film was a phenomenal box-office megahit (the first to make more than $100 million) that transformed how movies were marketed and released; indeed, it almost single-handedly invented the modern blockbuster. Beyond that, it was also an excellent action thriller, made under difficult conditions at sea (it was mostly shot on and off the island of Martha’s Vineyard) that could just as easily have sunk both the film and the career of its young helmer. Instead, Spielberg parlayed his critical and commercial triumph into one of the longest and most successful Hollywood careers of all time. He and his good friend George Lucas (who, with Star Wars in 1977, cemented Hollywood’s embrace of blockbuster culture) may have, in 2013, complained about the kinds of films now made by the studios, but with their one-two knockout punch to the movie industry’s “new wave” experiments of the 1970s, they are largely responsible, for better or for worse, for our current era. Still, Jaws remains ever what it was: a terrifically entertaining movie made with tremendous skill and energy, extremely watchable even 40 years after its release.

Join us on Friday, June 26, at 1pm, on WYPR (88.1FM), on the Midday with Dan Rodricks show, when Linda DeLibero – Director, Film and Media Studies, Johns Hopkins University – and Christopher Llewellyn Reed (that’s me) – Chair and Professor, Department of Film/Video, Stevenson University – will discuss, along with our host, Dan Rodricks, our thoughts on Jaws and Spielberg (about whom we did a previous show, back in January, 2013), as well as on the film’s impact on Hollywood and popular culture. What, to you, has been the film’s legacy since it came out in 1975? If you the saw the film in its original run, what did you think of it then, and what do you think of it now? Do you ever, because of the film, think about sharks when you swim in the ocean (I know I do!)? Do you avoid the water completely? Add your voices to the conversation via email (midday@wypr.org) or phone (410-662-8780 locally, or toll-free at 1-866-661-9309). If you can’t listen live, then check out the podcast later by visiting the show’s site. You can also leave your thoughts in the comment section of this blog. Hope you can listen in!