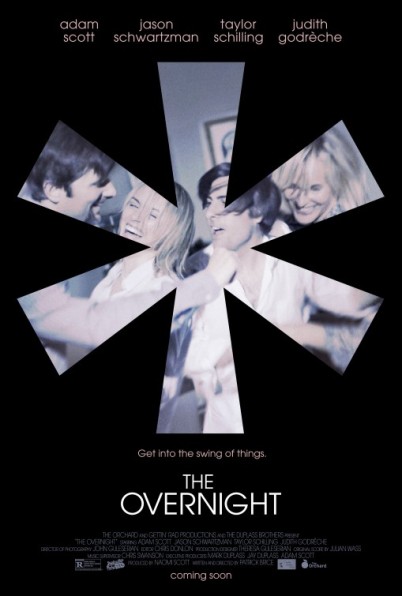 I saw this film back in March, at the annual SXSW Festival, and loved it. After two documentaries on Day 1 that left me cold, I finally hit the screening jackpot with this raunchy sex comedy from the director of Creep (which I had missed at the previous year’s festival). Starring Taylor Schilling (“Orange is the New Black“), Adam Scott (“Parks and Recreation“), Jason Schwartzman (Rushmore) and Judith Godrèche (Potiche), The Overnight is a delightfully off-beat and unpredictable film about a dinner party to which newly minted Los Angelenos Schilling and Scott are invited by oddly compelling Schwartzman and Godrèche. Featuring alcohol, drugs, some boobs, full-frontal prosthetic penises and paintings of male anuses, the movie is definitely for adults only. But boy is it fun! If it loses energy towards the end, that doesn’t mean we haven’t laughed outrageously on our way there. What makes the film work is the delightfully charming chemistry between all four leads and the disarmingly laid-back vibe to the whole affair. Do not expect to learn profound truths about the human condition, but do expect to be entertained. It opens this weekend at the Charles. Leave the kids at home.