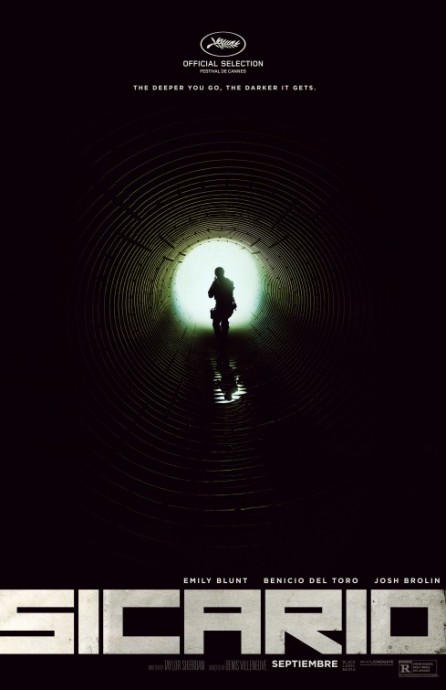 Sicario opens with a text-on-screen definition of its title, explaining the word’s Latin roots and current, Latin American meaning: a hitman. All the time, we hear a low bass beat that, to me, at first, sounded annoyingly like music from the theater next door. It’s persistent and grating, and then suddenly we are in the bright sunlight of Arizona, along for the ride as an FBI squad prepares to take down some drug dealers. They burst into a generic house, exchange gunfire, and then, once the dust settles, discover, within the walls of that house, the stuff of nightmares. Our guide throughout this tight, masterful adrenaline-fueled sequence is Kate Macer, the leader of the federal team, and tough as she is, even she can’t comprehend the horrors they discover. The guys they’re dealing with make Gus Fring in “Breaking Bad” look like an amateur.

So far, so terrifying. Kate is played by the terrific English actress (and new American citizen) Emily Blunt (Edge of Tomorrow), who, ever since The Young Victoria, in 2009, has proven, time and again, that she is worthy of our undivided attention when on screen. Here her character holds all of the promise of her earlier dynamic roles: she’s smart, fearless, and extremely capable. She’s also driven by a powerful internal force to catch the men creating havoc in her border town.

But then the movie gets in the way, and we lose sight of the great qualities of Blunt, the actress, and Kate, the FBI agent. I’ve seen two previous films by Denis Villeneuve: Incendies and Prisoners. I found the former to be a brilliant meditation on the cycle of violence in the Middle East; the latter attempted to be a film about the cycle of violence within each of us, but ended up just being an exercise in violence. Villeneuve has bold ideas, and is a fine visualist, but sometimes cannot control his impulses towards quasi-torture porn. Sadly, here we are more in the territory of Prisoners than Incendies.

That is not to say that the film has nothing going for it. Shortly after that terrific opening, Kate is recruited by a shadowy upper-government organization, headed by the always watchable Josh Brolin (starring right now in Everest, as well), and before long finds herself across the border, in Mexico, on the Bridge of the Americas with her new team, bringing a drug lord back into the United States for questioning. She doesn’t know why she’s there or what she’s supposed to do. But when all hell breaks loose – in another solid bit of mise-en-scène – she acts, saving herself and at least one other member of the group, Alejandro – a man of mysterious origin – played by Benicio Del Toro (Savages) with initial gravitas and wit that, sadly, evaporates later in the movie.

We have a great setup: idealistic young agent, recruited to catch the “real bad guys,” finds herself asked to commit acts she deems illegal. Will she sell her soul for the higher purpose (as it’s put to her)? Will that be the central conflict, the war within herself? That would have been interesting. Instead, what we get for two hours is Kate’s constant naïveté about the nature of the work that governments do to fight crime. She is shocked – SHOCKED – to find lawbreaking here. And shocked again. And again! To which I answer: really? What a bore you are. Instead, then, of an evenly matched duel between her and Alejandro (who turns out to have very specific motivations of his own), we get a rabbit facing off against a tiger. No contest. And very little drama. Such initial promised squandered.