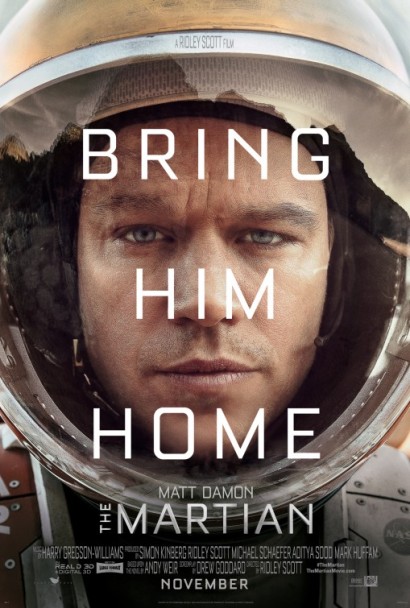 It’s another beautiful day on Mars, our closest planetary neighbor. As far as the eye can see stretches a reddish landscape reminiscent of Monument Valley in the great Westerns of John Ford. Given how science-fiction films supplanted the Western almost 40 years ago, with the release of Star Wars (a process that Western author John Jakes eloquently describes in his introduction to the anthology A Century of Great Western Stories), there is something plaintively beautiful about these vistas. As the film progresses, our lone hero stranded in a hostile environment, riding through the dusty desert in his dune-buggy rover, the elegiac power of the images stems from this simultaneous invocation of past and future, combined.

Who is this man, lost on the 4th rock from the sun? It’s Mark Watney, played with wry humor and physical grit by Matt Damon (The Bourne Identity). As the film opens, he and the other members of his six-person interplanetary crew are on “sol 18” of a planned month-long stay on Mars (a sol is a Mars solar day, 3% shorter than an Earth day). Into the raw majesty of their work site comes a sudden violent dust storm, and their commander calls to abort the mission, lest their MAV (Mars Ascent Vehicle) tip over, leaving them with no way to reach their orbiting spaceship for the return journey. As they make their way through the whirling clouds of particulate matter, a loose satellite disc strikes Watney, pierces his EVA suit and sends him spiraling into the dark. Search as they might, his colleagues can’t find him, and with the MAV about to topple and Watney’s on-suit vital-sign reader registering a zero, they leave the surface, abandoning what they think is Watney’s corpse.

But he is not dead, and once the storm passes, he regains consciousness and makes his way back to the Hab (or Habitat Station). In a gruesome scene of self-stitching, Watney is able to clean and close the wound in his side. That’s all good, but it doesn’t take long for him to realize that, alive though he may be, he’s alone on a planet 54.6 million kilometers from Earth, with limited rations and no way of communicating with NASA. Fortunately, he’s a man of great scientific ingenuity (as we would hope an astronaut would be). As he says in the video log he keeps, he’s going to have to “science the sh** out of this.” And that he does.

Based on the bestselling book of the same title by Andy Weir, the movie is a brisk adaptation (even at 140 minutes, which go by quickly) of what was already a brisk novel. The screenplay is by Drew Goddard, the showrunner of Netflix’s “Daredevil” (and one of the credited writers on World War Z), and it doesn’t waste a lot of time with elements that don’t advance the narrative. This is a classic “man with a problem” story, and since that problem is of rather epic proportions, in a world we haven’t seen before, every physical detail feels fresh. Directed by Ridley Scott – whose 1979 Alien is still one of the best films about space exploration to date – the movie is a marvel of an action thriller in which there isn’t a whole lot of action. There are the occasional explosions, and a final sequence worthy of the best parts of Alfonso Cuarón’s Gravity, but the real “action” – and real hero of the film – is the science. It’s wonderful to see a movie in which nerds are celebrated.

Watney may be far from home, but he is not, ultimately, alone. Once NASA figures out he is alive, they get on the case, sometimes effectively, sometimes not. Though it may be mostly Damon’s movie, it’s also a nice ensemble piece, as we cut back and forth between Watney, the folks on Earth working to save him, and the crew on their way back from Mars. Not only does the film celebrate scientists, it also celebrates gender and racial diversity (as much as a Hollywood film can), even making a few changes to the source text to allow the mission commander played by Jessica Chastain (Interstellar) her own heroic moment. Other noteworthy performances include Chiwetel Ejiofor (12 Years a Slave), Michael Peña (Ant-Man), Kate Mara (Fantastic Four), Donald Glover (Magic Mike XXL) and Jeff Daniels (“The Newsroom“), among others. The dramatic stakes are high, as is the tension, but the film never loses site of the fact that it is here to entertain, and that it does, marvelously. Even if – in strictly narrative terms – no one goes through great character development, there is more than enough conflict and resolution to satisfy even the strictest adherents of Aristotelian three-act structure.

It’s nice to see Ridley Scott in such fine creative fettle once more. After the one-two miserable punch of The Counselor and Exodus: Gods and Kings, I was getting worried. Shooting in 3D – a format not strictly necessary for this story, but one that adds to the majesty of the images – he has created a visually stunning work that marries science and fiction in the best possible way. A lot of reviewers have already expressed the hope that the film could reinvigorate interest in space exploration. Here’s hoping.