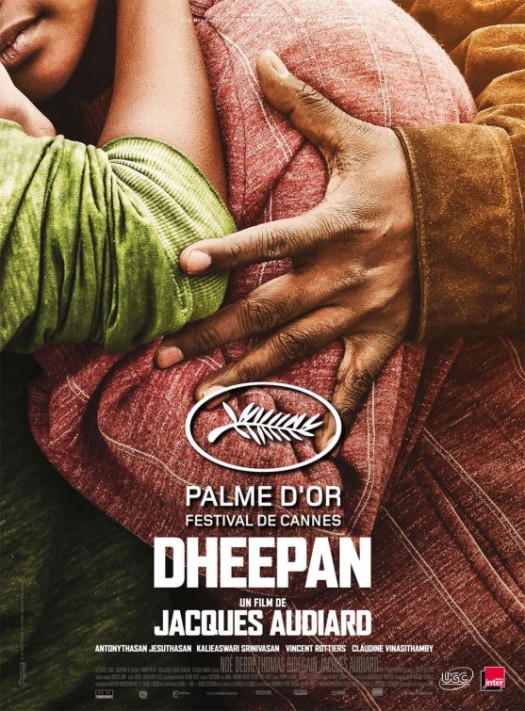 Dheepan is a man out of place and out of time, adrift in a world not his own. Like a gunfighter in a classic Hollywood Western – Shane comes to mind, most obviously – he does his best to fit in to his new and alien surroundings, but there’s always the looming threat of his past catching up to him. Will he succumb to the weight of history, or rise above it?

This is the central dramatic question of the new film from French director Jacques Audiard (Rust and Bone), whose films often combine violent gangster-genre elements with serious meditations on identity and otherness. His heroes frequently live on the margins of society, yet fight to find a way towards the center. In Dheepan, his protagonist is not just other, but alien, a Sri Lankan refugee in Paris escaping the civil war back home.

Dheepan, it turns out, is not even his real name. As the film begins, we see our hero in a group of men – Tamil Tigers – burning corpses; whether of their comrades or victims, we do not know. Immediately afterwards, we watch as he changes to civilian clothes and throws his uniform on the bonfire. We find him next in a refugee camp, where he joins forces with a woman he doesn’t know, who has just recruited an orphan girl from within the camp, to form a fake family, adopting names on the passports of dead fellow Sri Lankans. Families make for less threatening immigrants than single people. From now on, he will be Dheepan. Their destination? France.

Once arrived, Dheepan and his new “wife” – Yalini – and “daughter”- Illayaal – find themselves in a housing project outside Paris, where Dheepan, barely able to speak the language, is the new superintendent. They strive for normalcy, but it’s more than hard, especially since Yalini has family in England, where she’d rather go. Further complicating matters is the fact that the local drug gangs rule the roost. If the new immigrants – this is a community of immigrants, mostly from North Africa – can just keep their heads down, perhaps they’ll get by. Or not.

Antonythasan Jesuthasan, who plays Dheepan, doesn’t so much play the part as live it. Much like the man he portrays, he was drafted into the Tamil Tigers as a young man and did his fair share of killing before escaping and coming to France. This is only his second film. A natural, he avoids excessive externalization, allowing his brooding eyes to reveal the depths of his feeling. His co-stars Kalieaswari Srinivasan – who plays Yalini – and Claudine Vinasithamby – who plays Illayaal – are both first-time actors, yet equally as present. They form a brilliant trio, at first three separate individuals each in it for their own survival, but eventually – maybe – a real family.

Dheepan won the Palme d’Or at last year’s Cannes Film Festival, and it certainly packs a powerful punch. It’s not without its flaws, however. As with most other Audiard films, it’s the plot that gets in the way, rather than the metaphysics; a little too much contrivance towards the end mars the perfection of the middle section. The violence of the film may also be too much for some, mistaking arthouse pedigree for purely intellectual adventures; Audiard, however, always goes for the literal jugular. Still, whatever its ultimate shortcomings, Dheepan offers a visceral ride in which real-world problems join with cinematic conventions to form a powerful tale of survival.