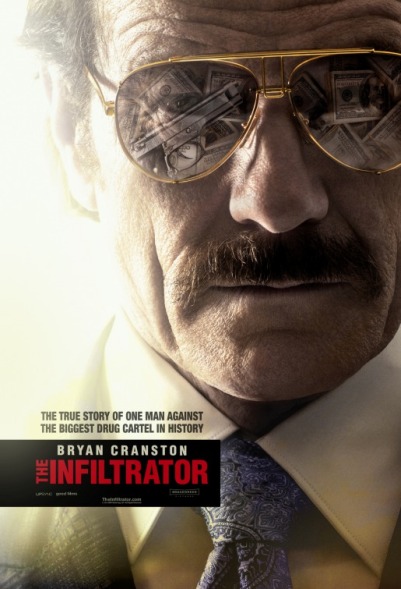 Following his delightful 2011 thriller The Lincoln Lawyer – which helped launch the Matthew McConaissance – director Brad Furman decidedly did not return to form with his 2013 follow-up, Runner Runner. Where the former was taut and masterfully paced, the latter mistook baroque intrigue for meaningful drama, losing itself in the murky depths of what passed for plot. It was a disappointing come-down, but now Furman is back, working off of a script by his mother, Ellen Brown Furman (a type of collaboration which, apparently, is a cinematic first), and I am happy to report that the result, while far from perfect, makes for a reasonably entertaining two-hour undercover procedural that mixes pulpy, stylish fun with a palpable sense of real-life danger. Furman still can’t quite escape a penchant for unnecessary melodrama, and all too often allows the intrusive score from composer Chris Hajian (Welcome to Academia) to ruin otherwise fine moments, but this is still a compulsively watchable tale of derring-do that mostly rises above its flaws.

Based on the true-crime autobiographical account, of the same title, by IRS/U.S. Customs Agent Robert Mazur (still very much with us and still offering his services to those in need), The Infiltrator takes place in 1985, in Florida, where the Colombian drug cartels are flourishing in the midst of Reagan-era America’s “war on drugs” (a term actually coined in Nixon’s time). Government agent Mazur, fresh from a successful drug bust in which he was severely burned by the microphone wire taped to his chest, could retire with a full pension, his work-related injury guaranteeing that no one would think the worst of him. Instead, he decides to go after the big money this time, rather than the low-level pushers, and soon finds himself posing as a New York Mafioso, peddling money-laundering services to the drug kingpins of Pablo Escobar‘s organization. It’s some seriously risky business, the stress of which inevitably takes a toll on Mazur’s home life. Still, part of the attraction to this line of work is that one gets to legally live like a gangster, and there’s no question that Mazur takes to the part with glee and gusto. Beyond the question of his physical survival, the larger issue is whether or not his soul will remain intact.

Mazur is played by Bryan Cranston (Breaking Bad) who, at 60, is a perhaps a little old to play a man in his 40s, but whatever the cragginess of his features, he brings his usual commitment to the part, and perfectly represents Mazur’s moral dilemma as he plunges deeper into the undercover abyss. He’s helped a lot by a stellar supporting cast, which includes John Leguizamo (American Ultra), Olympia Dukakis (7 Chinese Brothers), Diane Kruger (Inglourious Basterds) and Benjamin Bratt (Love in the Time of Cholera), among others. It’s hard not to lament the waste of the likes of Amy Ryan (reprising, to a T, her performance from Central Intelligence), Jason Isaacs (Nine Lives) and Saïd Taghmaoui (La Haine), in tiny parts, but at least the film is filled with skilled actors in even the most throw-away of roles. And when the story drags (and it does), there’s never a moment where we there isn’t at least something, or someone, to hold our interest. So despite some inconsistent plotting – including one scene, involving a tuxedo, that is an egregious example of a screenwriter inventing the implausible for purely dramatic purposes – the film delivers a meaningful payoff at the end, where the at-times Byzantine narrative threads all come together in a satisfying finale. Crime may not pay, here, but competence reaps some solid rewards.