[Note: This review also appeared on Film Festival Today at this link.] 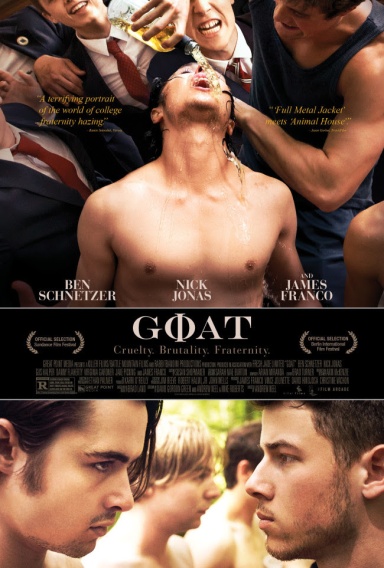 Based on Brad Land’s 2004 memoir of the same name, Goat tells a tale of college hazing run amok. We find ourselves at a nondescript university probably somewhere in the South (in real life, it was South Carolina’s Clemson University, while the film, itself, is shot in Ohio), where young men bully and cajole each other into acts of physical torture and quasi-sexual abuse, all in the name of rushing a coveted fraternity. As a meditation on the mechanics of male bonding, Goat, from indie director Andrew Neel (King Kelly), has a lot to recommend, filled with sensitive performances from its two leads, playing brothers Brad (Ben Schnetzer, Pride) and Brett (Nick Jonas, of the Jonas Brothers). If it ultimately ends up feeling like much ado about not as much as were hoping for, it’s because we are led, early on, to expect the worst, and instead are treated to something less than a nightmare (though there is, indeed, a goat involved). Yes, there is real tragedy, but it is unexpected and incidental, which feels like a cheat. Granted, one shouldn’t change the facts of the true story, but the opening is so brutal and uncompromising that what follows cannot help but appear less so.

Schnetzer, especially, is the one to watch. He’s an exceptionally fine young actor who brings a visceral power to his character’s tribulations. As the movie begins, both Brad and Brett are at a party – the kind where boys will be boys and girls will be sex objects – and Brad, the younger one, not yet in college, decides to take off just as Brett is getting into the coke, booze and naked ladies. Bad move. Better to be lost in a party where you feel ill at ease than to experience what follows. Outside, Brad is accosted by an unknown male partygoer who asks him for a ride. Unsure of himself, Brad agrees, only to find out that there’s a second guy. It doesn’t end well, and the next day Brad is much the worse for wear, and without a car, the victim of a serious assault. He cannot understand why he didn’t fight back, and for the rest of the film will be suffering from some serious PTSD.

Before long, though (the film has a lovely, elliptical approach to time), summer is over and it’s time to go off to school, where Brett is already an established presence. One thing Brad knows for sure – even though he does not, in fact, seem like his brother at all – is that he will most definitely be joining Brett’s fraternity, Phi Sigma Mu (a fictionalized composite of real fraternity names). But to do so means that he, along with all the other pledges, will have to suffer untold indignities, many of which cause traumatic flashbacks to his earlier beating. This part is beautifully told, raising expectations of catharsis to follow, which never quite happens. There is an eventual confrontation between the forces of reason and those of madness, but the story veers a little too much away from Brad’s point of view to remain entirely engaging. Co-written by director David Gordon Green (Joe), whose work frequently explores the pitfalls of male culture (and there’s nary a woman in sight here, unless she’s at a party), the script is best when it stays focused on the relationship between Brad and Brett, sometimes not bothering to fully flesh out the supporting characters. Still, there’s really good stuff here, and Schnetzer and Jonas more than make it worth the effort to see.