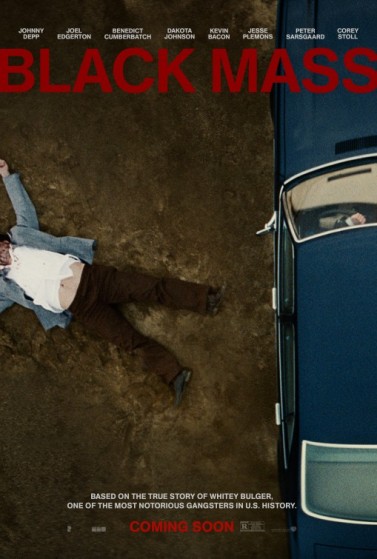 In 2014, documentary director Joe Berlinger (Under African Skies) released a movie about the notorious Boston gangster James “Whitey” Bulger, entitled Whitey: United States of America v. James J. Bulger. I saw it at the Maryland Film Festival that year, and found it to be both a comprehensive look at the life of a career criminal and utterly riveting. Made while Bulger was on trial, in 2013 (he was captured in 2011 after 15 years on the run), and finished after he was sentenced, the film used first-hand accounts of accomplices, victims and witnesses to tell the chilling tale of a brutal psychopath’s rise and fall. We never saw Bulger, but did hear his voice from the courthouse tapes. You know what his main concern was? To make sure that no one thought him a “rat” (he was on file as a former FBI informant). Murderer? No problem. But not a rat. Chilling, indeed.

In 2015, narrative (fiction) director Scott Cooper (Crazy Heart) has released a new movie, also about Bulger, in which we see the man quite a bit. Only here he’s played by Johnny Depp (The Lone Ranger), who is so physically transformed that many news outlets have been calling him “unrecognizable.” I would agree with that statement. Both his makeup artist and dialect coach deserve an award (as do his blue contact lenses). Whether or not the actor, himself, turns in a particularly memorable performance is up for debate. I enjoyed watching Depp – but then, I always do, as the man has had, has, and probably always will have, a commanding screen presence – but I did not find his characterization of the man he plays especially nuanced. He’s a violent creep who can turn on the charm when he wants to (which isn’t that often), but who never has much to say that isn’t a threat (direct, veiled or otherwise).

His FBI handler, John Connolly, however – played by Joel Edgerton (The Great Gatsby) – can’t stop talking. Connolly grew up with the Bulger boys, both Whitey and his younger brother Billy – played by Benedict Cumberbatch (The Imitation Game) – who, for many years, was the most powerful politician in Massachusetts, and as Black Mass begins Connolly is freshly returned to Boston and looking for a way to make a name for himself by taking down the Italian mafia that runs the North End neighborhood of the city. Whitey – a childhood nickname, but he prefers Jimmy – a former convict with time in Leavenworth and Alcatraz behind him, is moving up in the Irish-dominated Winter Hill Gang. Connolly makes a pitch to his superiors that they can use Jimmy Bulger as an informant against the Italians and thereby “clean up the city.” Unfortunately, this arrangement works primarily in Bulger’s favor, as, for many years, he does what he likes, when he likes, under the protection of the FBI. It’s a sweet deal for a very sour man.

Most of the folks involved in the film are professionals – Kevin Bacon (X-Men: First Class), Adam Scott (The Overnight), Peter Sarsgaard (Blue Jasmine) and even (a very good) Dakota Johnson (Fifty Shades of Grey), among them – and deliver adequate to fine performances. The film looks great: cinematographer Masanobu Takayanagi (Silver Linings Playbook) knows when to keep the images light and when to make them go very dark. But at the script level, there’s a big gaping three-pointed knife wound at the center of the story:

All of that said, the film is frequently entertaining – if grim – and if you like your mob violence in your face, you’ll get it here. If you want a truly mesmerizing account of Jimmy Bulger’s life, however, you’re in the wrong place. For that, there’s always Berlinger’s documentary.