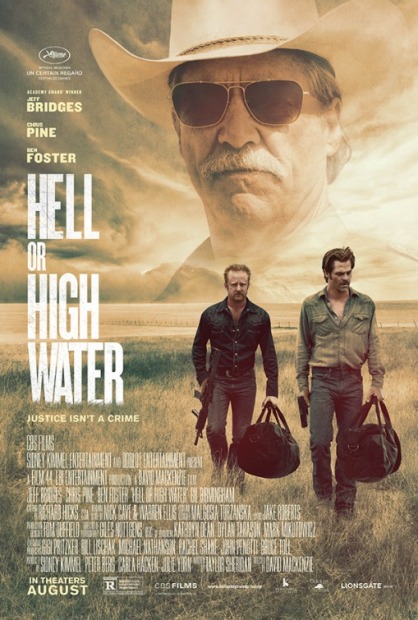 It’s early morning in West Texas. The camera drifts lazily over and through the low-rise buildings of a small town, nondescript and empty in the morning. A patch of graffiti reads “3 Tours in Iraq, but no bailout for people like us.” We travel through a parking lot and come to rest on a bank entrance, where a lone woman approaches the door, pulling out her keys. She’s the first employee of the day. Suddenly, from behind, come two masked men, who push her roughly inside. And so begins Hell or High Water, where riches will be sought, Robin Hood-style, from those who have stolen them. Our protagonists may be bank robbers, but the villains here are the forces of society that steal from the poor to make the rich richer. That graffiti we passed by is more than just a random happenstance: it’s the theme of the film.

The truth of who’s right and who’s wrong is, fortunately, a lot more complicated than that – and of what importance is right or wrong in a good narrative, anyway, as long as the characters believe in what they’re doing? – or we’d have a movie far too simple for its own good. Instead, what we get, courtesy of director David Mackenzie (Starred Up) and screenwriter Taylor Sheridan (Sicario) is a morally complex tale of economic and existential survival masquerading as a damn fine bank-heist thriller. Brothers Tanner (Ben Foster, Lone Survivor) and Toby (Chris Pine, Star Trek Beyond) need a lot of money quickly, for reasons soon to be explained. Tanner is the wild card, just out of prison; Toby’s a divorced father of two, calmer and brighter than his older sibling, but in need of his ruthlessness. As they make their way through a series of attacks on banks, which go off with varying degrees of success, they attract the attention of a pair of Texas Rangers, played by Jeff Bridges (True Grit) and Gil Birmingham (California Indian). The Rangers are yin to the brothers’ yang, patiently tracking them down, trading (mostly affectionate) barbs as they go; two sets of partners with whom we spend almost equal time, dividing our loyalties. It’s Birmingham’s Alberto – of Native-American descent – who seems to most understand the brothers’ motivation, as he likens their plight to that of all conquered people. If it’s not the White Man putting you down, it’s the banks, who go after all the poor, regardless of race.

It’s a deeply satisfying film that mixes genres – crime, Western, epic drama – in a brilliant combination that keeps us guessing how it will all turn out until the very end. There are great – if also devastating – surprises in store and, most importantly, a wonderful sense of plot and character development that is often missing in some of the bigger movies of our day: unlike in, say, the last Marvel movie, here we care deeply about the fate of all involved. Foster and Pine are both terrific, as are Bridges (doing his old-man thing, but doing it well) and, especially, Birmingham, an underused actor (perhaps best known to most viewers as Billy Black in the Twilight films) who here gets a chance to shine. A deceptively small movie, set in vast and desolate landscapes, Hell or High Water deals with important themes relevant to our day and age, all the while entertaining the “hell” out of you. Go see it.