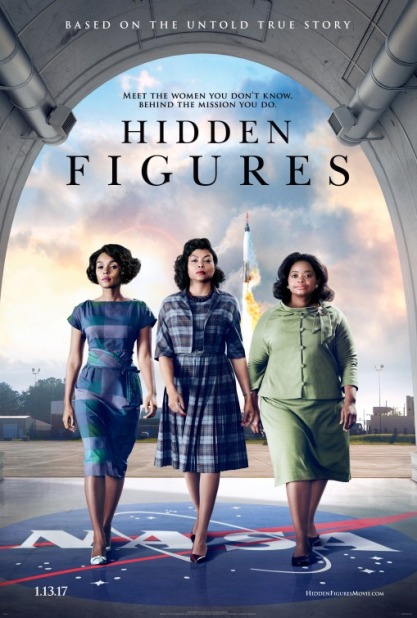 Hidden Figures is the second feature from writer/director Theodore Melfi, who brought us St. Vincent in 2014. Where that film was a low-key, offbeat comedy starring Bill Murray, Melissa McCarthy and Naomi Watts, this sophomore effort has a much larger agenda. Here, we right an historical wrong, looking back at the important – and overlooked – contributions that a group of three African-American women made to our nation’s space program. This film has star power, as well, with Octavia Spencer (Fruitvale Station), Taraji P. Henson (Think Like a Man Too) and singer Janelle Monáe, not to mention Kevin Costner (McFarland, USA), Kirsten Dunst (Fargo: Season 2) and Mahershala Ali (Moonlight). Does it work as art and entertainment, as well as corrective history?

It sure does, even if, along the way, it simplifies the narrative (and the science) in the way that only Hollywood biopics can. We get broad beats and a clear three-act structure, the whole punctuated by a score that tells us when to feel what emotion, and at the end the good folks triumph. And what’s wrong with that? Nothing, really, unless you like your history re-told with the complexity that is its due. To be fair, it’s not easy to compress a story this big in just a few hours and do justice to the intricacies of race, gender and science at its center. Still, Melfi has his heart in the right place, and as we saw in St. Vincent, he has an ear for good dialogue. He’s blessed with a stellar cast, and makes the most of them.

Based on the book of the same title, by Margot Lee Sheerly, (which profiled 4, and not 3, women), Hidden Figures follows the trials and tribulations of three math wizards – all women, all African-American – in the early 1960s as the United States was trying to beat the Soviet Union in the space race. The Russians got their first, so the next goal was to get to the moon before they did. For that, we needed all of our talented citizens, even those who had to drink from “colored” water fountains and use “colored” bathrooms. Yes, Virginia (which is actually where the film takes place), segregation was the still the law of the land in many places while we, in the ostensible “land of the free,” were trying to win the Cold War against our authoritarian (aka, not “free”) enemies across the pond. Melfi does a great job, simplicity and all, with his exposé of our hypocrisy. It’s too bad that he is less good on the math, making Henson’s Katherine – supposedly a great mathematical thinker – speak about her subject in ways designed to make a fifth grader understand. I get why he would do that – who among us average viewers is a genius – but it feels silly.

Barring that, however, this is solid entertainment, providing a showcase for three talented actresses and their supporting players. As recent events in our country have shown, even after 8 years with our first-ever African-American President, we still have far to go in terms of racial healing, we are still riven by race and gender. So watch Hidden Figures to see women of color who broke down the restrictive barriers of their time, and think about what lessons can be applied in the days, weeks and years ahead.