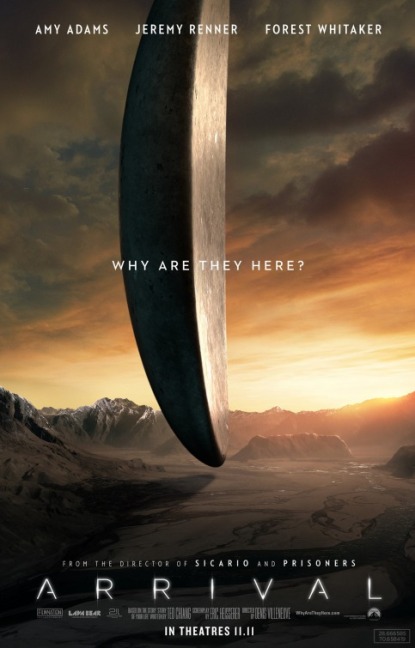 There is much to admire and love in Arrival, the new film from Canadian director Denis Villeneuve, a creatively dynamic soul known for the eclectic variety of his subjects. While I have not enjoyed everything of his that I have seen, I nevertheless usually appreciate his restless mind, which strives to explore the human condition from a multitude of different angles. His often troubled characters act as mirrors of our own existential crises, suffering on the audience’s behalf as they journey through tortuous (and tortured!) metaphysical labyrinths. That description makes the movies sound like philosophical gabfests, but Villeneuve’s strength is his ability to combine tense action sequences with profound meditations on life. When this combination works, it’s a thrilling experience. When it doesn’t, it’s a bit of a muddled mess, even if occasionally exciting. Arrival is of the former variety, through paced more slowly than earlier Villeneuve films (all with his trademark one-word titles) like Sicario (muddled, yet exciting), Prisoners (just muddled) or Incendies (thrilling all the way). If some of it feels derivative of other science-fiction work, that doesn’t take away from the fact that the movie tells a beautiful story about how the best of us might behave when confronted with the mystery of the unknown.

Amy Adams (American Hustle) plays Louise, a celebrated linguist whose seemingly tranquil life as a college professor is interrupted when the Earth is suddenly visited by 12 gigantic extraterrestrial black pods that hover above their respective destinations (scattered around the globe), defying gravity and just about every other scientific fact we take for granted. Once contact is made with the creatures inside, she is recruited because of some previous interpreting work done for the military, whose commanders (embodied by Forest Whitaker (The Butler) now believe she may be the best person to help us decipher a brand-new language. She’s not alone among the academics: Jeremy Renner (Kill the Messenger), as Ian, a physicist brought along to decipher the science of the aliens once we know how to talk to them, joins Louise on the team that interacts with the one pod hovering over the United States, in Montana. As they struggle to understand these strange beings from afar, they find that time is not their ally, as the other nations where pods similarly hover grow aggressive in their suspicions that the aliens do not come in peace. Soon, it seems, that aggression may lead everyone into a battle not only with the visitors, but with each other.

Time and its linear progression forwards and backwards have always been the medium of cinema. Without divulging any plot spoilers, Arrival takes that manipulation of time as its central conceit. The opening images give us Amy Adams talking to the memory of her child, now deceased, in flashback. Later events take these dreams of the past and move them front and center in her consciousness as she confronts the challenge of alien technology. What can the past teach her (and us) about the future, and is each moment in time really so separate the one from the other?. It’s a beautiful question to ponder, and also a very sad one, as the dead child reappears over and again, a mix of inspiration and despair. Unfortunately, it is also a derivative one, as well, culled from Christopher Nolan’s Interstellar, another science-fiction film that used the fluidity of time as the driver of its plot. This is not the only borrowed element in Villeneuve’s movie: the extraterrestrials – a combination of octopus (though they have but seven legs) and pachyderm – recall the design of Gareth Edwards’ Monsters; the pods, themselves, gracefully swimming through the sky like humpback whales, accompanied by what sounds like whale song on the soundtrack, call to mind another time-based sci-fi adventure, Star Trek IV: The Voyage Home. It’s as much homage, I suppose, as copy, and Villeneuve still carves out a niche of his own, but I nevertheless found these resonances occasionally distracting.

Adams and Renner, however, are not distracting, but wholly engaging, Adams, especially. As Louise, she owns the film, her liquid eyes containing pools of thought and feeling that pull us in, no matter the limitations of Villeneuve’s imagination. Whitaker, unfortunately, though a fine actor, has made the choice to give his character an odd, almost impenetrable accent that gradually fades as the film progresses; early on, I could barely understand what he said in a few key moments. The rest of the cast is solid enough, though this is clearly Adams’ movie, as well as cinematographer Bradford Young’s, shooter of Selma and A Most Violent Year, among other visually stunning works. Hats off to the visual-effects team, too, which has done a marvelous job making the creatures feel real and present. Overall, then, this is a film to see, ponder and savor, even if it sometimes falls short of perfection. In our current world, ever more riven by cultural division, we need stories like this, where vastly different beings find a peaceful way to communicate. See it for that reason, and for Adams.